Bob Fleck was the founder and owner of Oak Knoll Books. In 1976, Bob decided to leave a career in chemical engineering to start Oak Knoll Books, specializing in books about books. Two years later, he started publishing in the same field, beginning with a reprint of Bigmore and Wyman's A Bibliography of Printing. He was a past president of the Antiquarian Booksellers Association of America (ABAA) as well as the past president of the International League of Antiquarian Booksellers (ILAB/LILA). In 2016, he passed away and left his business to his son Rob, who has worked at Oak Knoll for many years. An in memoriam by ILAB (one of many heartfelt and beautifully written ones floating around online and in print) is available here. A video interview with Bob conducted by the ABAA is also available here. 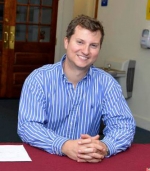 Rob Fleck is the son of founder Bob Fleck, and is the current Antiquarian Director for Oak Knoll Books. Having started off pulling books at the age of three, he started working full time at Oak Knoll as the bookkeeper and accounts payables. In 2008 he took over the Antiquarian department, and in 2016 he became the President & Owner after the passing of his father. He is now the main representitive of the company, including and especially for libraries, private customers, and institutions regarding out-of-print and rare books. He represents Oak Knoll at all bookfairs, so if you happen to be face-to-face with him, come up and say hello!

Matthew Young brings more than 35 years of experience as a graphic designer, art director, writer, and editor to his position, along with a passion for book history from his avocation as a collector and independent scholar. He is a member of several bibliophilic organizations to whose conferences and journals he has occasionally contributed. Oak Knoll Press published his books Field & Tuer, the Leadenhall Press (2010) and The Rise and Fall of the Printers’ International Specimen Exchange (2012). He can be reached at 609.203.2345, or the email below. 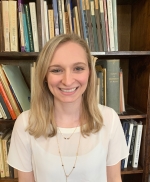 A recent graduate of the University of Delaware and previous intern at Oak Knoll, Erin is ecstatic to continue learning about the antiquarian book world and publishing industry as Oak Knoll's Generalist.

Prior to his start in March, Dennis spent years working for Comcast as a customer service specialist. He also spent time working with computers prior to coming to Oak Knoll. He enjoys the change of pace between working customer service and shipping. For questions about shipping, contact him at the email below.